Competition to win a £100 Barton Voucher 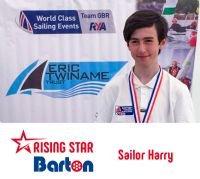 We are pleased to be hosting a series of short talks during the RYA Virtual Dinghy Show.  Join in and get to know some key members of the Barton team.  Their passion for sailing goes into every block designed and made so we wanted to give customers around the world the chance to meet and ask questions of them.  There is no need to register...  Just click on the link below the talk at the time.

Barton Marine’s laser kits have now been approved as class legal for the Laser Class, providing a great new option for sailors looking for lightweight, free running gear to upgrade their one design Laser. ﻿

Harry with his Laser 4.7

﻿Seventeen year old Harry Newton, a member of Whitstable Yacht Club and Westbere Frostbite Sailing Association is the winner of the Barton Rising Star Competition and will become a Barton Marine brand ambassador in 2021.